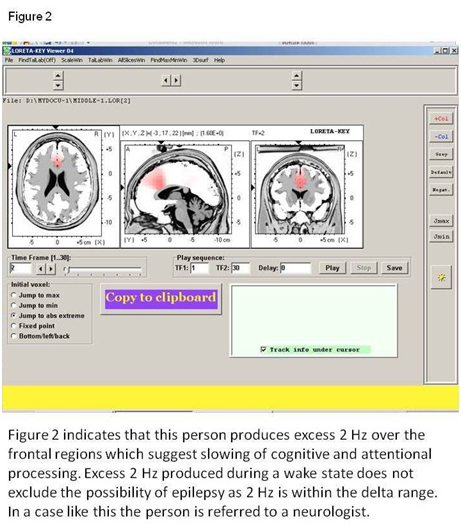 The purpose of the S Loreta Z score current source density information is to identify deficit functional areas and to train those areas by making use of neurofeedback training. This information plays a significant role in validating an individual’s functional deficits and to correlate with the clinical history available.

In 1994 a researcher Dr. Roberto Pascual Marqui updated a mathematical theorem showing that the generators of electrical activity inside of the 3 dimensional surface or head consisting of skin skull and cerabral cortex can be localized. It also localizes activity in nearby structures such as the parahippocampal gyrus, insular cortex and other internal temporal lobe structures.

The best most accurate method Pascual Margui described was Loreta.

The individual’s raw scores are compared to standardized Z scores which represent the normal population.

The location of abnormal discharge is indicated by the Z scores which focus upon the 47 areas of Brodmann in which the brain is divided.

What further, how can we help?

The new database discussed above brings us close to the various Brodmann areas, and training or treatment can be spot on. How do we do it?

Brain waves are monitored by placing sensors or electrodes on the scalp, which register the electrical signals inside of the brain over specific associative areas. Brainwaves carry messages to and from all parts of the body through the nervous system.  Breathing, heartbeat, muscle coordination, metabolism, blood sugar levels, memory, attention, learning, emotions and all cognitive functioning or mental activity are controlled by brainwaves.

During neurofeedback, the brainwaves are monitored. NF is non-invasive, in other words no impulses go into the brain.  How does the training work?  Operant conditioning is a process through which the brain gets visual and auditory feedback when it produces productive and effective brain frequencies.

When the brain produces ineffective frequencies, in other words, if the brain is either over or under aroused, problems are experienced such as:

Noticeable results occur normally during the first ten sessions. Since neurofeedback is a process, this form of treatment requires a significant number of sessions to ensure consistent and lasting benefits.  The brain learns a new pattern.  Like learning to play an instrument, one needs a lot of practice.  Changes are normally seen with symptoms disappearing and identifiable abnormalities in EEG are changed with epilepsy or petit mal epilepsy. Typical EEG patterns seen with ADD kids also change from generalized slowing to normal frequencies. The most common effects reported: improved sleep, better focus and concentration, less anxiety, improvement of academic abilities and more stable emotions.